Our Voice: Holly Farley on enhancing diversity and inclusion in the nursing community 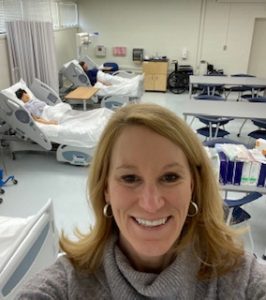 Holly Farley, EdD, MSN, RN, received her Associate’s in Applied Science from Lake Land College in 1994 and achieved her Bachelor of Science in Nursing from Mennonite College of Nursing in Bloomington two years later. Farley mostly worked in surgery, spending time as the first assist for a general surgeon for several years, where she also conducted the patient education. Teaching always called to her, so Farley returned for her Master of Science in Nursing Education, which she received from Southern Illinois University Edwardsville in 2005.

After graduation, Farley took a position at Illinois Eastern Community Colleges (IECC) in Olney, Illinois, where she had completed her nursing education practicum. “I ended up working there for nine years, and I loved it. A lot of our students were not traditional-aged nursing students. The majority were obtaining a second-career or single parents working full-time, and I really enjoyed working with that population of students.” While Farley completed her Doctorate of Education from Grand Canyon University, an educator position in the RN to BSN program at Eastern Illinois University (EIU) became available, which she has now held for six years.

Building a nursing program from scratch

A year and a half ago, EIU received a significant monetary gift from the Gail and Richard Lumpkin family to start a traditional prelicensure bachelor’s program. Asked to spearhead the new program, Farley now serves as Eastern Illinois University Chair, Director of the Traditional Program, and Associate Professor. After months of work, including a full renovation of a simulation lab, the program recently launched, taking on its first class of students. “We couldn’t officially market our program until the final approval from the Illinois Board of Nursing in July, so we looked around at EIU to see who had most of their prerequisites done and invited them to start the nursing program in the spring. Two weeks ago, we started with the first ten nursing students to go through the program, so it is very exciting.”

As someone passionate about diversity and inclusion, Farley is incredibly proud of the work that went into creating the curriculum. “We got to build our program from scratch and didn’t inherit anything, so we purposefully infused diversity and culture and created a concept-based curriculum where it is taught throughout the entire program. It’s not just, ‘Okay, this is diversity, or this is how you care for a patient with these religious beliefs.’ It’s part of every single course.”

Farley serves as a Director on the ANA-Illinois Board and a member of the advisory group for ANA-IL’s Expert Panel on Diversity, Equity, & Inclusion (DEI). “I’ve taught policy and politics in nursing now for seven years, and talking with students to help them understand what ANA does is part of the discussions we have in our curriculum. They should understand what ANA does, how they push for safe practice and the best policies and procedures for nurses across our state. Even those who have been RNs for several years — and I’m just as guilty — if it’s not something that you’re directly a part of, you often don’t know what’s going on behind the scenes or that people are lobbying for us in Springfield.”

Farley is thankful that organizations like ANA-Illinois give nurses a voice in political arenas. “Many people, not just nurses, hear policy or politics and think, ‘No, thank you. I don’t want anything to do with that.’ So I think it’s important that nursing students understand they can make a difference in their organizations, whether it’s suggesting a new evidence-based practice or participating in a research study, they’re doing their part to improve nursing.”

Farley is also a Diversity, Equity, and Inclusion Group (DEIG) member for the American Association of Colleges of Nursing (AACN) and a member of a subcommittee for ANA-IL’s DEI Expert Panel, where she works to improve diversity in educational settings. “I’m on a subcommittee focused on how diversity in nursing programs can be maximized so that from the start, we can get more diverse students, graduate more diverse students, and in turn, improve the diversity in nursing overall. Here at EIU, we’re looking at revising our admission process to capture the best students, not just by grades. Because many programs look solely at SAT or ACT scores, so one of the big things I’m working on with these groups is putting together a plan to share with nursing schools on what options there are to diversify their programs through the admission process. As a new program, we have the ability to design a more inclusive process from the beginning.”

Asked how others can advocate for diversity and inclusion in their institutions, Farley says, “I think the best advice I could give is; every institution has a policy, so find out what that policy is and if the unit you’re working on is following it. Suggest being a diversity coordinator and getting a group together to make sure there are policies in place, and then offer to write new policies and procedures. Take the initiative in your organizations and make a name for yourself as someone passionate about diversity and willing to do the work. Volunteer to be a preceptor for new nurses and model inclusion on our unit actions like these promote a positive culture in which nurses can grow and learn as a team.”